“Since 2013, thousands of local residents have joined The Center for Family Justice for its annual Walk a Mile in Her Shoes event, a mile-long fundraising walk through downtown Fairfield to raise awareness about the impact sexual abuse and violence against women and girls has in the six local communities it serves.

“For the second consecutive year, CFJ will hold its ninth annual Walk a Mile in Her Shoes as a month-long virtual event because of ongoing Covid-19-related social gathering restrictions. Once again, the Bridgeport-based nonprofit is encouraging supporters to take personal fundraising walks to take a stand against gender-based violence throughout the month of April, which is Sexual Assault Awareness Month. 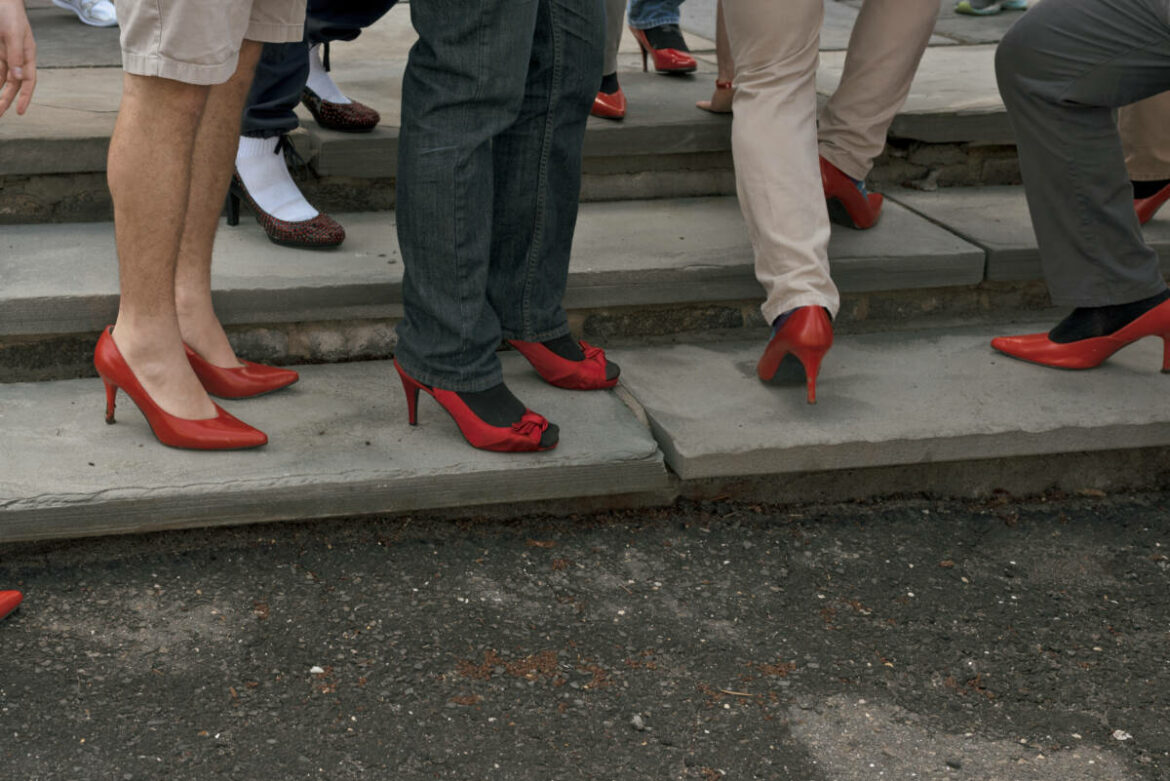 “Sponsored by Aquarion Water, the fundraising and awareness event will culminate the morning of Saturday, April 24 with a live social media broadcast to celebrate those groups and individuals who have taken their own walks on behalf of CFJ throughout the month.

“To champion these efforts, CFJ will continue to work closely with its White Ribbon Committee, a group of male community leaders dedicated to breaking the cycles of domestic and sexual violence in the six local communities it serves.

“This virtual walk effort will once again be chaired by Gary MacNamara, Executive Director of Public Safety & Government Affairs at Sacred Heart University, and the former police chief in Fairfield. MacNamara has served as WAM’s chairman since its inception. He is known for sporting a towering pair of red high heels as he walks each year to demonstrate his solidarity with female victims and survivors of sexual abuse and violence.

“Debra A. Greenwood, President & CEO of The Center for Family Justice said holding virtual walk again this year was in the best interest of community health.  In 2019, the last year the event was held as an outdoor community walk, more than 1,500 people joined in for the traditional one-mile trek through downtown Fairfield. In 2020, the walk went virtual, but was extremely successful as hundreds of walkers joined the virtual effort.

“’Last year, we were incredibly inspired by the enthusiasm for our first virtual walk and the number of people who joined us to send the very important message that even during these challenging times, we all must stand together in the efforts to end sexual abuse and violence in our communities,’ said Greenwood. ‘As much as we miss walking together, we hope our supporters will bring the same enthusiasm to our virtual walk as they did in 2020.’

“Walk a Mile in Her Shoes 2021 has a goal of raising more than $50,000 to support the Elizabeth M. Pfriem Camp HOPE America-Bridgeport, CFJ’s therapeutic summer camp and year-long mentoring program for local youth impacted by domestic and sexual violence.

“The need for the walk and its financial support is more important than ever, Greenwood noted. Since the Covid-19 pandemic began calls to domestic violence hotlines throughout the state have increased by as much as 30 percent. CFJ’s safe house is at capacity and it has been forced to provide hotel shelter to those fleeing abusive relationships to help keep them safe at a cost of tens of thousands of dollars.

“MacNamara says he is encouraging people to find their own way to be part of this effort. The traditional walk has long been noteworthy for the number of men who walk down Fairfield’s Post Road wearing heels or red shoes to show their solidarity and commitment to breaking the cycles of gender-based violence.

“’While COVID 19 has changed a lot, it has not changed the need to take a stand against sexual violence and should not change our engagement in this important event,’ said MacNamara. ‘Victims are often isolated and engaging in Walk a Mile in Her Shoes activities will show them our community cares.  The walk also highlights the need to engage men and boys in prevention efforts as well as the need for funds to assist in sending traumatized children to Camp HOPE [America], so they can enjoy time away and begin the process of restoring hope in their lives. I hope people will join me in this important community effort.’”

Read more from The Monroe Sun by clicking here.

The post Walk a Mile in Her Shoes to raise awareness of impact of abuse appeared first on Camp HOPE America.